I should have learned more Portuguese.

Within an hour of being at our new apartment, as we strolled around the grounds to view the facilities, we met a Brazilian man wearing a Bahia tee-shirt who was busily preparing a churrascaria (Brazilian BBQ party) at the building’s common area. After we shyly replied to his “boa tarde” with our own badly pronounced version of the same phrase, he said more to us, and we apologetically said we didn’t speak Portuguese. He laughed, pointed to his chest with both hands and said, “I no English!” He beckoned for us to follow.

He kept talking, showing us the preparations for the party, and pointing to us, and then to the ground and the keg and the steaks. He offered a beer to Rob, not to me, and then asked me if it was okay if Rob had a beer. He offered me a sparkling water… and while the strange sexism was apparent, I was in no mood to dislike this friendly stranger in any way. I am a foreigner here, and he was inviting us — after meeting us for 3 minutes — to share a party that had all the makings of a fun night, filled with broken conversation and laughter. I felt humbled and grateful. And I was pretty sure, had we stayed for the party, the beer would have been flowing in all directions. We shared the drinks and tried hard to understand each other.

Only in the 48+ hours since this encounter have I pieced together all the bits of our conversation with this stranger, and learned the phrases I wish I’d had in the moment. We had a dinner meeting with our new colleagues, so we had to refuse his invitation — I should have said “Vou tenter chegar a festa,” (or something to that effect), which means that I will try to come, even if I know I can’t. Apparently Brazilians don’t really ever outright refuse an invitation; instead they say maybe, and then just don’t come if they can’t. But I also learned that invitations are not given insincerely: if you are invited, you are wanted. This made our friend’s invitation so soon after meeting us feel very special.

He told us that Mick Jagger has a house in the area, and that sometimes he sees him on the street. There was much gesturing and “Mick Jagger! Mick Jagger!” I later learned that ol’ MJ has a house in Morumbi he keeps for when he visits a son of his who lives here. Our new friend tried to say more to us about music. He gave us a CD of a friend of his who was going to be playing music at his party. He made guitar gestures.

He said, over and over, “Meu amigo e seu amigo,” pressing his hand into ours, fist-bumping and laughing. At the time I only caught “amigo,” and we all spent a few minutes pointing at each other saying “amigo” over and over. I learned today that the phrase is more like “mi casa es su casa,” — something one says to indicate their sense of hospitality toward you — and yet, it feels like a significant difference to offer your people rather than your house. You needn’t be wealthy or have anything to share to welcome someone into your circle of friends. And in reality, that kind of warm friendship is really the kind of support we’ll need most in this experience.

The phrase I did catch at the end of our encounter was “Va com Deus,” which sounded enough like French when he said it that I completely understood. And I did feel blessed. On our way out the front exit awhile later, we saw him again, and we made the same friendly gestures and did the cheek kissing and laughed and waved. It is my hope that when we see him again, I will be able to say more to him.

Now I am in my new living room, and I can hear the crowd cheering at the Morumbi stadium we toured yesterday afternoon. The girl who gave us the tour was a skinny kid who apologized for her English, when in actuality she did a pretty damn good job. She reminded me of students I am sure I will have in my classes in just a few weeks. The city scape glitters, and I turn off the lights to look at it, the way I do with a Christmas tree. But these lights go on and on, into the smog that hugs the distant hills. So many voices cheering together, so many living rooms twinkling together, so many broken conversations yet to come.

These are the romantic minutes of “a chegada” — the arrival. I could have begun this post with the basics that lack the same romance but still feel mysterious. Our trip was long — but not the longest stint I’ve ever done on an airplane. Like everything else in this process so far, it was smooth and without drama. All 24 of our bags and all three guitars made the trip unscathed and on time. This still seems like a miracle, even as we unpack the last of our bags and I rediscover the stuff that has been packed away for over a month. The Delta folks at the Redmond airport were friendly and efficient and helpful. When I called to check if we would indeed be able to bring all of these bags, the woman on the phone just kept saying “You will be accommodated.” I have to admit, I didn’t believe her at the time, but I totally believe her now.

We have been warmly welcomed by our new colleagues, too, and it is apparent that they’ve done a ton of work organizing this arrival week so that everything goes well and so that we understand that they are here to be supportive when things don’t go well. An organization called In The Know came today to tell us about Sao Paulo specifically and Brazil generally; it’s mainly their presentation that helped me fill in the blank spaces from our encounter with our friend at our building. This organization hosts a number of trips that sound interesting, but they also have a spot in the Carnival parade, and if you join them, you can take classes and learn the dance and don a crazy feathery costume and be in the parade. Dude, I am totally doing that. It’s out of every comfort zone I have firmly established in my life so far, and that is precisely what this experience is all about.

The kids are adjusting well. Haley seems to have found a kindred spirit in a colleague’s kid, with whom she can commiserate about the trials of being a “teacher’s kid.” She is excited about her classes, and as we toured the campus today, I felt a twinge of jealousy — I want to be in some of these classes! Since she has been assured that her few years of Spanish will be very helpful learning Portuguese, and even encouraged to simply speak Spanish to Brazilians when she doesn’t know a particular word, she has become more confident in trying out her language skills. I think she’ll be the family translator in no time.

Justus has also made fast friends. He had a bit of an anxious night last night, and I think all of the craziness and fatigue manifested into some fear that brought him to our room in the middle of the night. He felt better as we all talked and shared about being excited and nervous. I was sympathetic, but I also felt proud at how well this young little boy expressed his feelings. Some of the imagery of his fears were clear indicators to me of the psychic damage our American culture does to kids: he wanted to know if ISIS was in Brazil, and he was worried about planes crashing into our building. I am so thankful to allow him to escape the 24 hour news cycle that locks us into paranoia and anxiety. When we shared this story with a couple of Candaian colleagues, we compared notes about the relative pressures we felt as children from our respective cultures: Rob and I shared that the atom bomb loomed large for us (I hope the Russians love their children, too), and for the Canadians, you “were Satan if you didn’t recycle.” I know there will be cultural pressures for Justus in Brazil, but for now I am grateful that those don’t involve a sense of having enemies over every border. Tonight, at our school churrascaria (complete with the open bar and the man described as “the school bartender” — literally, there’s a man who is employed as the school bartender), Justus and his new friends danced on the stage at the student center amphitheater. Already he seems to be feeling better.

Even though we’re mostly unpacked, our apartment still feels somewhat empty — in part because it’s bigger than our old place and in part because we have a fraction of the personal belongings we once had. I’ll post pictures of our place once we are done unpacking and hanging art and nesting. I think it’s going to be great.

Honestly, I think this place will fill with treasures and stuff quickly. Mostly, I hope to fill it with new friends and music. And a huge feathery costume come February. 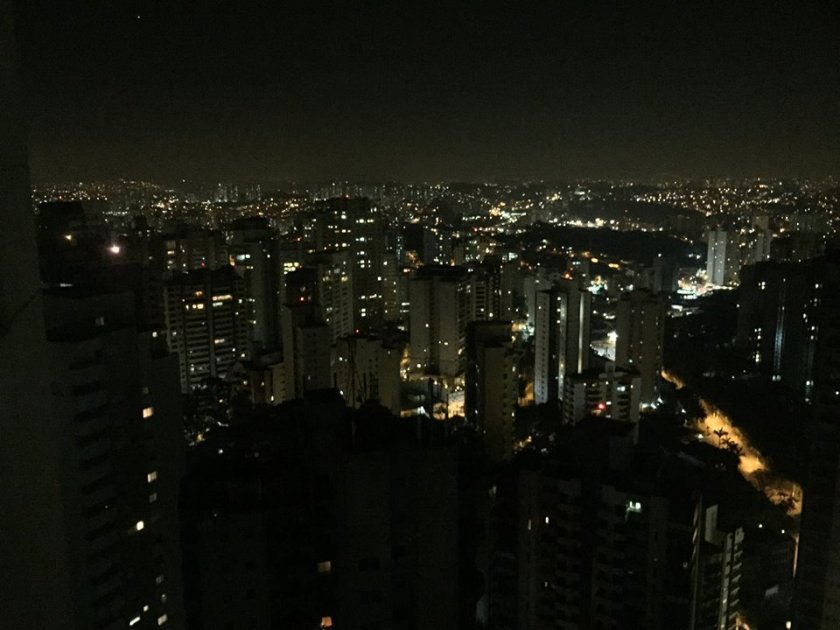 The night view from our balcony in Morumbi

24 bags and boxes, three guitars, four backpacks. Everything arrived at the Sao Paulo Airport, and was magically transported to our apartment by the very organized and capable Graded staff.

As a reader, I have long understood the power of writing to transform consciousness and experience. As a writer, I have often doubted my ability to matter. Because I think I'm done with the doubt, compelled to write whether or not it matters, I am here. View all posts by Nikki Darling

I haven’t gone anywhere yet. I’m still in Bend, OR. Stay tuned!